Reflections from the hard drive of the machine that enables the voice of the Leader of the Free World
And somehow, some will be offended.
Too bad.

Is it really a jar of mayo? 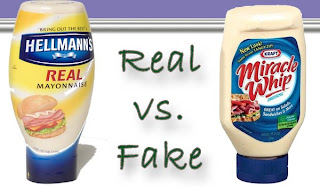 There are so many urgent matters taking our time these days. A nasty recession (but not the worst since the Depression - but keep talking it down,) the rise of socialism, the man made global warming myth, I could go on.
However, today there are bigger fish to fry. And after frying, slathering them in tartar sauce. But tartar sauce made with mayonnaise or with a revolting substitute.
Like me, Christopher Taylor at Word Around the Net is a purist when it comes to condiments.

Miracle Whip is one of those nasty fifties products that was marketed with dozens of recipes that James Lileks loves to mock. It is the same sort of bastard demon child of real food as Sandwich Spread and Spam.

Some people, dump this industrial waste into recipes such as cole slaw to get that nasty sweet assault on your senses.

His full article may be enjoyed by clicking here. Come back when you're finished, if you don't mind.


Oh, you're back. Thanks. Let me pick up where Mr. Taylor left off.
Miracle Whip is an abomination.
Because several misguided members of our extended family suffer from the delusion that this pitiful substitute condiment tastes good, my dear wife makes two types of potato salad for family gatherings. One version is made with pure, delicious mayonnaise (Hellmann's of course) - while the other is slathered in that toxic waste called Miracle Whip. Invariably, the bowl of good potato salad is emptied first.
Similar family feuds also erupt over butter and substitute spreads (yes, I'm looking at you, yellow container. And I can and do believe it's not butter!)
For so many things in our society, the pale imitation has been marketed so well, that it is often preferred over the real deal.
Come to think of it, that might explain why we have the president we do.
Posted by Bob at 12:58 PM 4 comments:

Lincoln Day 2009 brought a rather intense wind storm to western Pennsylvania -much of the eastern U.S., really - causing power outages and other mayhem.

We had some odds and ends blown around our porch and the wind got under the the grill cover, all too briefly turning it into a light than air craft. It landed face down in the muddy back yard.
The more interesting development was noticing a neighbor's trampoline parked in the spot where my car usually spends the night.

For no particular reason, the night before, I had parked the car a little further back in the parking area than usual. The result was a near miss instead of lengthy conversations with the neighbor and insurance adjusters.

I count myself fortunate.
Posted by Bob at 7:34 PM 2 comments:

This old yarn has been around awhile. I needed a good chuckle; this delivered:

A cowboy named Bud was overseeing his herd in a remote mountainous pasture in California when suddenly a brand-new BMW advanced out of a dust cloud towards him.

The driver, a distinguished looking man in a Brioni suit, Gucci shoes, RayBan sunglasses and YSL tie, leans out the window and asks the cowboy, “If I tell you exactly how many cows and calves you have in your herd, Will you give me a calf?”

Bud looks at the man, obviously a yuppie, then looks at his peacefully grazing herd and calmly answers, “Sure, Why not?”

The yuppie parks his car, whips out his Dell notebook computer, connects it to his Cingular RAZR V3 cell phone, and surfs to a NASA page on the Internet, where he calls up a GPS satellite to get an exact fix on his location which he then feeds to another NASA satellite that scans the area in an ultra-high-resolution photo.

The young man then opens the digital photo in Adobe Photoshop and exports it to an image processing facility in Hamburg , Germany .

Within seconds, he receives an email on his Palm Pilot that the image has been processed and the data stored. He then accesses an MS-SQL database through an ODBC connected Excel spreadsheet with email on his Blackberry and, after a few minutes, receives a response.

Finally, he prints out a full-color, 150-page report on his hi-tech, miniaturized HP LaserJet printer and finally turns to the cowboy and says, “You have exactly 1,586 cows and calves.”

“That’s right. Well, I guess you can take one of my calves,” says Bud.

Then the Bud says to the young man, “Hey, if I can tell you exactly what your business is, will you give me back my calf?”

The young man thinks about it for a second and then says, “Okay, why not?”

“You’re a Congressman for the U.S. Government”, says Bud.

“Wow! That’s correct,” says the yuppie, “but how did you guess that?”

“No guessing required.” answered the cowboy. “You showed up here even though nobody called you; you want to get paid for an answer I already knew, to a question I never asked. You tried to show me how much smarter than me you are; and you don’t know a thing about cows…this is a herd of sheep. .

Now give me back my dog.

I haven't had much to say; still trying to digest the reality of the election.
Although, either way we would have a Democrat in the White House. So there's that.
Also, I don't think BO would approve of my views:

I'm an embarrassment to Barack!


I only scored 15 on the Obama Test