Yes, I said the best ever. Now get thee over to the Burgh Blog and readeth.

PittGirl, if I can't be one of your self united husbands, can I be your adopted crazy old uncle?
Posted by Bob at 6:06 PM No comments:

Down the memory hole

The was geek cool chic back in the day. Anybody remember how to use a sliderule? Ingenious devices.
Slip one of these babies into your plastic pocket protector!

(Photo credit: The Slide Rule Museum.)
Posted by Bob at 5:51 PM No comments: 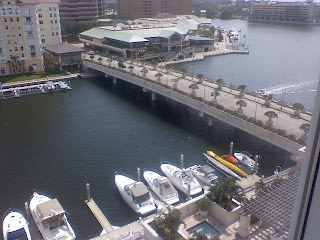 I'm in Tampa, Florida for a conference for telemedicine. Tele-what?
In brief, it is the use of telecommunications technologies to deliver health care remotely. This conference is focused on how to make use of various bio sensors in "smart homes" to better care for individuals who require regular access to the health care system. If you're so inclined, link here for more information.
The hotel is near the Convention Center, along a marina. The picture shows the view from my floor.
Posted by Bob at 2:27 PM No comments:

Each of us remembers where we were and what we were doing when the world as had had known it ceased to exist on that otherwise beautiful late summer morning. I've not talked much or written about that day, what one of my old psychology professors called a "flashbulb memory."

I was in our television studio / distance learning classroom teaching a teacher how to interact with students who were elsewhere (in the physical sense.) The first word was that there had been some kind of horrible aviation accident in New York, and so we continued the morning's lesson. Then another phone call from our receptionist a few minutes later ended any pretense of productive work that day.

I remember walking across the campus from the studio to my office. It was so still. Earily still, as iff the plants, the birds, and the wind all knew something big was happening. Back at the office, the conference room was full; coworkers watched the live feeds and tape loops from CNN, Fox News, NBC, and CBS. I saw the first replay of the second plane, and then the news out of Washington of a fire at the Pentagon. Within a few minutes, it was confirmed; a third plane into a building.

United Flight 93 had just a few minutes prior flown overhead (not directly above our campus, but nearly over my home about 20 miles away) - the battle for control of the cockpit apparently underway. We knew nothing of this at the moment. The telephone, cell phone, and Internet networks were straining under a massive traffic load, but I managed to get through to my wife. She was worried about our daughter who was driving back from Baltimore that morning. Then came word of a possible fourth hijacked plane; a plane that might be over Western Pennsylvania on a heading for Washington. A few moments later, the local TV station (the one where I had worked for 20 years) began reporting a plane crash in Somerset County. I knew this had to be that mystery fourth plane. Within a couple of hours, the local station was showing live shots of the crash scene. I watched the reporter doing what would have been my job three years earlier. Jon Myers was a tall kid; he grew up that day, reporting from the crash scene. It was at that moment I realized that I did not miss the news business; I was happy to be a consumer. And the news on this day was overwhelming. "Only" 3,000 dead in the collapse of the World Trade Center. It was miraculous that the toll was not higher, but even so, wrenching to the mind and soul.

Later we began hearing reports of heroism aboard Flight 93, while watching the columns of smoke rise above the New York skyline, seeing the beginnings of the effort that quickly transitioned from rescue to recovery, seeing the look on President Bush's face as he was informed of the attack while reading to the young schoolchildren, of hearing the fear in my daughter's voice as she finally got through on her cell phone, asking what has happened and what to do. So many images compressed into one large memory.

Now, seven years later, we hear the tinfoil hat crowd question the facts of that day. We see politicians wanting us to put that day behind us, lest we remember our resolve as Americans to rid the world of the animals who would do such a thing,

We must learn from the events of that day seven years ago.

If you can't say anything nice, play some music.

Light pop harmonies from the mid 1960s such as this managed to expose a new generation to some of the Tin Pan Alley standards of the 1920s, 30s, and 40s.

Living where I do, I've always found the Altoona reference amusing.
Posted by Bob at 10:20 AM No comments:

Betsy's Page offers us not one, not two, not three, but four posts reflecting on the Sarah Palin speech, and reaction to it.

Mr. William Teach at the Pirate's Cove is on top of all things Palin. I love this quote:

"…this feels like when Plaxico caught the game winning catch in the Superbowl. It's like when Arnott scored the Stanley Cup Winner in 2000 for the Devils. When Kirk Gibson yanked one out of the park for the Dodgers. I mean, I feel that good. The best one is when Jeff Friesen scored in game seven to put the Devs up 2-0. Sarah Barracuda is that good."

Pirate's Cove also provides us with video linky goodness, Governor Palin on the Global Warming scam, and links us to a treatise on redneck beauty queens.

Patterico reports on the surprising CBS News analysis of the Palin speech (a "thumbs up.)

Melissa Clouthier has been in "all Palin, all the time" mode for the past several days. She offers thoughtful posts on sexism, media bias, the Left's full-blown panic, and much more. You best just go and browse the entire site.

Kathy at Cake Eater Chronicles lives in the Minneapolis-St. Paul area and has been offering daily reports and photos from the convention. Her analysis mirror's mine,

"I don't know what else to say but, WOW, did Sarah Palin knock it out of the park. BOOM. Out of the park. Across the street. Knocking out a street lamp."

For a perfect balance of sense and sensibility, one must visit the Anchoress. As usual, she offers a rich, balanced linkfest. Her liveblog of the speech is also worth the read, particularly if you did not watch it live.

"I really think she struck a balance, there. She killed 'em. Softly."

Over at the American Princess, Emily discusses how she reacted to the speech, and the surprising response from the MSM.

Gina Cobb liveblogged, posted a lengthy essay on what we can expect from the BO camp and the MSM (yeah, I know, redundant) in the next sixty days, and links to a funny but NSFW (for rough language) comedy sketch on how Senator McCain selected his running mate.

Next we must see how she handles the media (past performance indicates they will also become barracuda chow,) and how well she does in the VP debate against Sen. Biden.

And we wrap up with some music…